The complaint was that I called my fellow IDESG colleagues Nazi’s. He was unsatisfied with my original statement about the tweet on our public management council mailing list. Some how this led to the Ombudsman taking on the issue and after I spoke with him in Tampa it was followed by a drawn out 5 week “investigation” by the Ombudsman before he issued a recommendation.
Then turns out after all was said and done there was never actually a formal complaint. There was the ombudsman taking action on his own. (its funny how organizations can use Ombudsman to not actually protect people with in institutions but use them as institutional forces to  push  people out who speak up and ask too many questions)
During the time I was being investigated I experienced intensive trolling about the matter on twitter itself. The trolling was done by someone obviously familiar with the situation who was upset. There were only 5 people familiar with them matter as it was ongoing through this investigation.During my own IIW conference the troll topped off the week by making implicit rape threats. This was very very disruptive and upsetting to me so much so I don’t even remember that  IIW.
Here is the tweet that I authored while pondering theories of organizational dynamics in Tampa and without any intent to cause an association in the mind of a reader with IDESG, NSTIC, nor any person or persons in particular note that I did not reference anyone with a @____ or add any signifying hashtags e.g., #idesg or #nstic in this tweeted comment. So unless you were reading everything you would never know I said it.

I own that the tweet was provocative but it was It was not my intent to cause harm to anybody or to the IDESG organization and wider identity community.
We can’t put documents up for community and public input and say “its 40 page document nobody has time to read” and laugh as if it is funny that the process is so bad that there is no ability for the body of the organization let alone the public to have insight. That is how not good things begin to happen no one is looking. I was trying to make a point that the meeting was being badly badly run and that poor process can lead to really bad outcomes.
I am very sorry if the tweet had an emotionally negative impact on people on the management council. I fully acknowledge that referencing anything relative to the Nazi era is triggering. It touches on our collective shame and surfaces vulnerability it is very hard to look at.
I also believe that we have to actually be prepared to do so. If we don’t examine the past we can’t be sure we will not repeat it. [Please click to see my my next post for this to be further expounded upon]
I didn’t choose to say anything along these lines because I was in the middle of a process with the Ombudsman I thought that would be honored and let to run its course.
I also didn’t feel one should feed internet trolls – one was being very aggressive and pestering me for an apology.
I think that we all need to keep in mind our roles as Directors of the IDESG when we interact with the public and with each other.
This includes hiding behind pseudonyms and aggressively trolling to get back at someone you are upset with. Which also happened – either deal with the issue in a formal process or take them out on twitter but do’t do both.
The whole process left my and my attorney puzzled. My attorney wrote a letter to the Management Council/Board of Directors with a whole bunch of questions and now that this is posted we look forward to their answers to those questions.
No one from he IDESG including the ombudsman ever responded or was concerned by the aggressive trolling and implicit rape threats on twitter by someone intimately familiar with the ongoing ombudsman process.
Abusive behavior towards women isn’t just a physical thing it is a psychological as well. I have felt unsafe in the Identity community since this incident. I am now setting it aside though and stepping forth in my full power.

Joe Andrieu and the Information Sharing Working Group has put a lot of work and effort into creating a Standard set of Information Sharing Agreements represented by a standard label. They want to invest in user -research to make it really work.
I am putting in $100 and I encourage all of you to do the same. They need to raise $12000 in the next 8 days.
See the Kickstarter Campaign here.

IIW is always a whirlwind and this one was no exception. The good thing was that even with it being the biggest one yet it was the most organized with the most team members.  Phil and I were the executive producers. Doc played is leadership role.  Heidi did an amazing job with production coordinating the catering, working with the museum and Kas did a fabulous job leading the notes collection effort and Emma who works of site got things up on the wiki in good order.
We had a session that highlighted all the different standards bodies standards and we are now working on getting the list annotated and plan to maintain it on the Identity Commons wiki that Jamie Clark so aptly called “the switzerland” of identity. 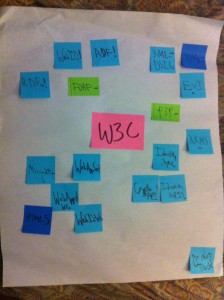 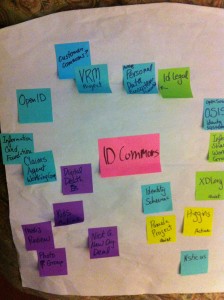 We have a Satellite event for sure in DC January 17th – Registration is Live.
We are working on pulling one together in Toronto Canada in
early February, and Australia in Late March.
ID Collaboration Day is February 27th in SF (we are still Venue hunting).
I am learning that some wonder why I have such strong opinions about standards…the reason being they define the landscape of possibility for any given protocol. When we talk about standards for identity we end up defining how people can express themselves in digital networks and getting it right and making the range of possibility very broad is kinda important.  If you are interested in reading more about this I recommend Protocol:  and The Exploit. This quote from Bruce Sterling relative to emerging AR [Augmented Reality] Standards.

If Code is Law then Standards are like the Senate. 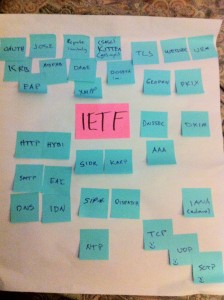 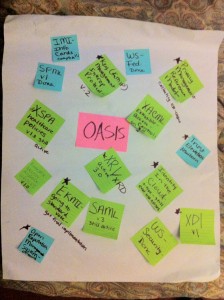 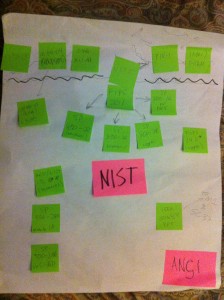 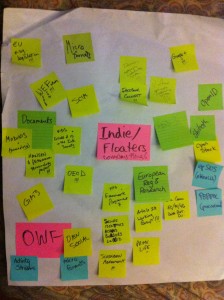 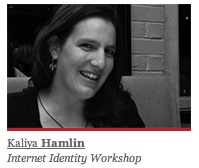 Following my post yesterday Google+ says your name is “Toby” not “Kunta Kinte”, I chronicled tweets from this morning’s back and forth with  Tim O’Reilly and Kevin Marks, Nishant  Kaushik, Phil Hunt,  Steve Bogart and Suw Charman-Anderson.
I wrote the original post after watching the Bradley Horwitz (@elatable) – Tim O’Reilly (@timoreilly) interview re: Google+. I found Tim’s choice of words about the tone (strident) and judgement (self-righteous) towards those standing up for their freedom to choose their own names on the new social network being rolled out by Google internet’s predominant search engine disappointing.  His response to my post was to call me self-righteous and reiterate that this was just a market issue.
I myself have been the victim of a Google+ suspension since July 31st and yesterday I applied for a mononym profile (which is what it was before they insisted I fill out my last name which I chose to do so with my online handle and real life identity “Identity Woman”)
In the thread this morning Tim said that the kind of pressure being aimed at Google is way worse then anything they are doing and that in fact Google was the subject of a “lynch mob” by these same people.  Sigh, I guess Tim hasn’t read much history but I have included some quotes form and links to wikipedia for additional historial context.
Update: inspired in part by this post an amazing post “about tone” as a silencing/ignoring tactics when difficult, uncomfortable challenges are raised in situations of privilege was written by Shiela Marie.
I think there is a need for greater understanding all around and that perhaps blogging and tweeting isn’t really the best way to address it.  I know that in the identity community when we first formed once we started meeting one another in person and really having deep dialogues in analogue form that deeper understanding emerged.  IIW the place we have been gathering for 6 years and talking about the identity issues of the internet and other digital systems is coming up in mid-October and all are welcome.  The agenda is created live the day of the event and all topics are welcome.
Here’s the thread… (oldest tweets first)
Note all the images of tweets in this thread are linked to the actual tweet (unless they erased the tweet).  END_OF_DOCUMENT_TOKEN_TO_BE_REPLACED