Kaliya speaks and presents on  self-sovereign identity and identity on the blockchain to a variety of audiences around the world. Below is a sampling of talks her talks.

Blockchain Vs. Cryptocurrencies at BridgeSF, May 23, 2018

Identity is Changing: The Rise of Self-Sovereign Identity Infrastructure using Blockchain, May 2, 2018.

My Identiverse: The Evolution of Digital Identity and Openness, Plenary Digial Identity and Embodied Practice at What is Universe? University of Oregon, Portland April 19, 2018.

Personal Data, My Value Six Sense Making Diagrams in The Rise of the Personal Information Economy Workshop. at the Connected Marketer Summit January 2017 and at the Cloud Identity Summit June 2016 (Big diagram).

Updates from the Online Identity Battlefield co-presented with Aestetix at Hackers on Planet Earth 10, HOPE X in July 2014

Your Identity / Your Data: What do Women Want? SD Forum Women’s Network June 2012

Us, Our Organizations and the Evolving Social Web presentation for the Nonprofit Technology Enterprise Network.

Us our Organizations and the Evolving Web v2 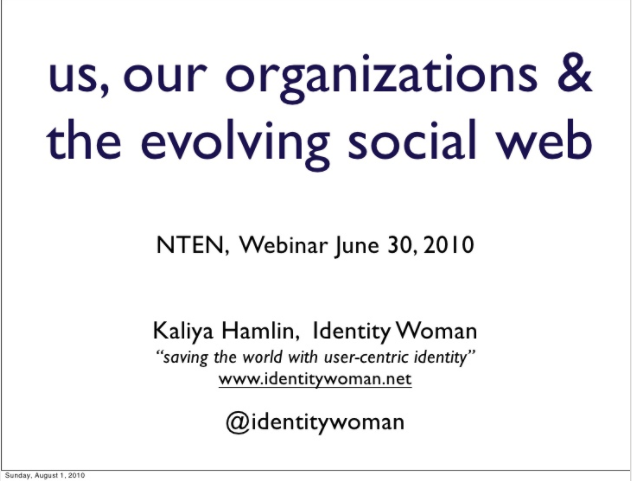 I spoke at Community 2.0, on Identity Across Communities – Tools for Making it Real. May 13, 2009 San Francisco, CA

This presentation will cover the core user-centric identity technologies that are emerging to support people being able to port their identifiers and information about themselves between websites. The goal is to make it easier for people to share information along with support the emergent social effects like trust that come from persistence across time and space and ultimately build stronger communities faster. The tools include OpenID, Open Social, Information Cards, The Relationship Button from Project VRM (Vendor Relationship Management).

I spoke at the Oxford Internet Institute symposium on Global Legal and Policy Frameworks in Identity Management.

The user-centric identity community has been working on information cards an open standard for claims based identity architecture (as opposed to a network end-point architecture). The big question that arises is “what is the business case?” This session will be an open discussion around the existing and potential business models and cases for such a meta-system to emerge.

I facilitated a SXSW panel about OpenID, Oauth and the Enterprise with Joseph Smarr, Bob Blakley and Danny Kolke the CEO of Etelos.

The debate over identity, data and authentication is gaining ground in the social networking world. The more difficult discussion regarding enterprises and Web 2.0 has yet to start. Businesses realize that they must protect the data of their company, employees and customers. Join brave leaders from several Web Application companies that are beginning the discussion – Are OpenID and OAuth good for the enterprise?

View SlideShare presentation or Upload your own. (tags: planetwork vrm)

View SlideShare presentation or Upload your own. (tags: iiw2007b commons)

Gnomedex August 7-9, 2007, Seattle WA. Was selected MVP voted on stage from the audience.

Museums, Identity and the Web

Values, Vision and the Via Media (at Archive.org) October 13 2005, Washington CA.