I was asked by Allison Fine to contribute to the Personal Democracy Forum  Rebooting America anthology.
This article looks at three leading edge deliberative methods that engage small groups of citizens representing voices of the whole.  They all were invented before personal computing and all could be augmented. You can see the methods outline in a chart in Appendix 6 and the eight steps of the processes are described in this article.

Deliberative Democracy in Theory and Practice

Download This Author’s Essay
“At the heart of America’s liberal democracy are competitive elections, but this design choice does not enhance collective intelligence and wisdom.”
John Ralston Saul, in “The Unconscious Civilization,” wrote “The most powerful force possessed by the individual citizen is her own government. … Government is the only organized mechanism that makes possible that level of shared disinterest known as the public good.” During the winter of 1997, fifteen Boston citi-zens—from a homeless shelter resident to a high-tech business manager, from a retired farmer to a recent inner-city high school graduate— undertook an intensive study of telecommunications issues. Over two weekends in February and March, they discussed background readings and got introductory briefings. Then, on April 2nd and 3rd, they heard ten hours of testimony from experts, computer specialists, government officials, business executives, educators, and interest-group representatives. After interrogating the experts and deliberating late into the night (with excellent facilitation), they came up with a consensus statement recommending judicious but far-reaching policy changes which they presented at a press conference at Tufts University, covered by WCVB-TV/CNN and the Boston Globe, among other news organizations. U.S. Representative Edward J. Markey, ranking Democrat (and former Chair) of the House Telecommunications Subcommittee, said, “This is a process that I hope will be repeated in other parts of the country and on other issues.”

These ordinary citizens ended up knowing more about telecommunications than the average congressperson who votes on the issue. Dick Sclove, a lead organizer of the event, says that their behavior contradicted the assertion that government and business officials are the only ones competent and caring enough to be involved in technological decision-making. This lay panel assimilated a broad array of testimony, which they integrated with their own very diverse life experiences to reach a well-reasoned collective judgment grounded in the real needs of everyday people. This proves that democratizing U.S. science and technology decision-making is not only advisable, but also possible and practical.
When the Framers of our Constitution met in Philadelphia in 1787, digital media, modern psychology, social psychology, and ecological and systems science did not exist. The deliberative democracy approach outlined above and expanded upon in this essay integrates the best of face-to-face social collaboration technologies with information and communication technologies for wise governance decisions. Using these kinds of processes and technologies we can actually hear what my collaborator and network colleague Tom Atlee calls the Voice of “We the People” expressing the public good.22
At the heart of America’s liberal democracy are competitive elections, but this design choice does not enhance collective intelligence and wisdom. It fragments communities and societies into reductionist, adversarial “sides” and reduces complex spectra of possibilities to oversimplified “positions” that preclude creative alternatives. The norm is that citizens abdicate decision-making to elected officials, who are in turn heavily influenced by the special interests they must serve to raise money to be re-elected. With few exceptions, existing processes of democracy 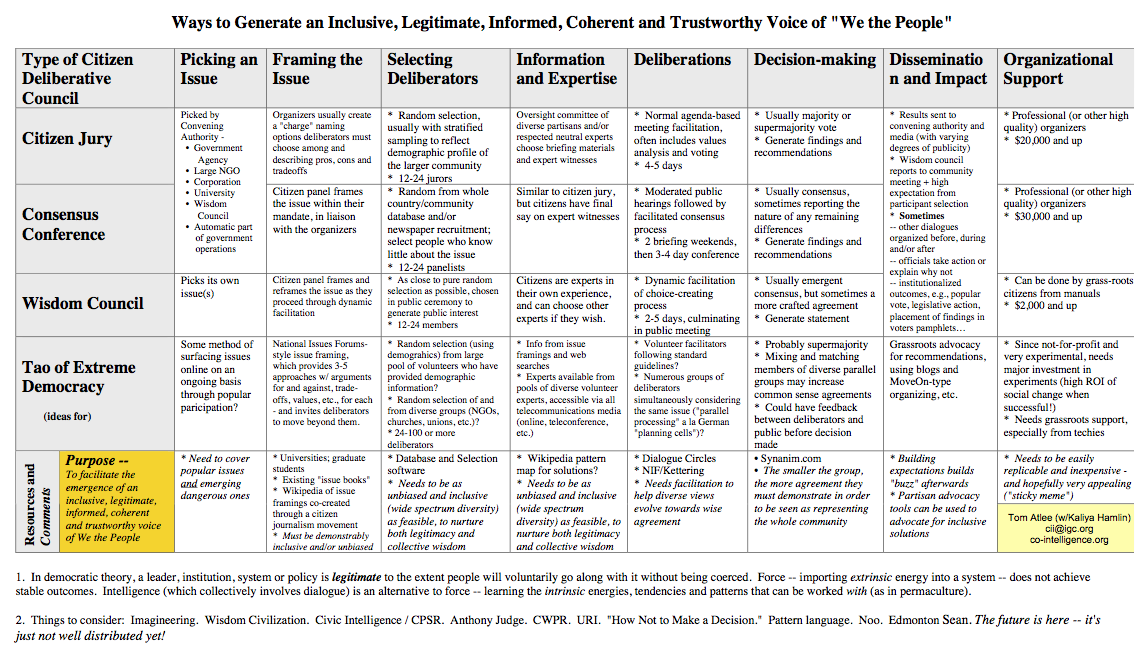 This post is Appendix 5 and 6 of Kaliya’s NSTIC Governance NOI Response – please see this page for the overview and links to the rest of the posts. Here is a link to the PDF.
This is the section before: People Diversity
This is the section after: Resource Guide on Public Engagement