Natural systems thrive when polarities are in dynamic balance – breathing in and out is a polarity humans leverage moment to moment. At the same time, we must attend to more than our Inhaling and Exhaling. We must attend to where the oxygen comes from and where the carbon dioxide goes. Paying attention to polarities within a part of the system is important to sustain life and, it is not enough. The part must also pay attention to the other parts and the whole for its own survival.With any polarity, it is always in the long-term interest of each pole to take care of both poles.

The Part and Whole polarity is available to be leveraged at every level of system. The individual cell in an organ; an organ in an organism; or, an organism in a larger community. We are talking about the development an Identity Ecosystem as a human techno-social systems ecosystem where polarities need to be leveraged. It seems appropriate as a way to gain insight and agreed upon signs of systems health to identify key polarities with stakeholders and monitor how well they are being leveraged over time. This ongoing assessment allows for informed self-correction as part of the dynamic balancing of the polarities in response to changing circumstances.

Polarities in the Strategy

The NSTIC Document clearly articulated many inherent tensions – polarities that exist when considering the formation of an identity ecosystem. This expression of polarities was one reason it was so well received by such a broad range of stakeholders. These stakeholders reflect different points of view relative to some key polarities. Those with perspectives that are on opposite ends of a polarity could see their point of view reflected in the outline of the broad vision. To make a ecosystem function the vision must be grounded and the tensions leveraged in service of each stakeholder group and the whole ecosystem.

Mapping the key polarities and getting broad stakeholder agreement on how to leverage them creates a process and structure to successfully negotiate the tensions between “opposing” stakeholder groups. It is also possible to assess how effectively a list of key polarities are being leveraged. This can be done by an unlimited number of people who only need to have access to the internet. The results can be broken down by any combination of demographics built into the assessment at the front end. The assessment also includes “Action Steps” and “Early Warnings” created with the stakeholders which support the effective leveraging of the key polarities.
When a polarity that we actually need to leverage, is instead treated as if it is a problem that we need to solve, those favoring different poles get into a power struggle over which pole will dominate. This leads to a vicious cycle in which everyone looses. The system looses first as energy is wasted in the either/or fight between the two poles. The system looses, again, when one side wins, because the result is to also get the downside of the “winners’” pole. Then the system looses, yet again, when it actually finds itself with the downside of both poles.
On the other hand, when a polarity is identified as a polarity, it is possible to leverage both poles in a way that creates a virtuous cycle supporting both poles and the system as a whole. This is why it is important to be able to identify and leverage key polarities in the systems we want to work.
Here is a list of Polarities reflected in the NSTIC document and named in the governance NOI:

A sub set of stakeholders would be involved in each step of the process. Once a draft assessment has been developed by the sub set of stakeholders, a much broader group of stakeholders will have the opportunity to experience and modify the draft assessment as a final step in confirming the final assessment.
See: The sub set of stakeholders gather and identify 4-8 of the most critical polarities that need to be managed for a healthy identity ecosystem.
Map: Each of the identified polarities are mapped which is a values and language clarification process. Agreement is reached on the positive (upsides) of each pole and the negative (downsides) of each pole which occurs when you over-focus on one pole to the neglect of the other pole. A Greater Purpose Statement (GPS)is agreed upon which responds to the question: “Why should groups invested in one pole generate a shared polarity map with groups invested in the other pole?” Then a Deeper Fear is also identified which a common fear of something advocates for each pole want to avoid. This completes a polarity map.
Tap: Ideas are generated for how to gain or maintain the upsides of each pole. This is done through Action Steps in support of each upside. Ideas are also generated for Early Warnings that let you know when you are getting into the downside of a pole so that you can self-correct early.
The objective is to create a virtuous cycle between the two poles in which you maximize the upsides of each pole and minimize the downsides. When this is done well, the system is more likely to thrive and move toward the Greater Purpose agreed to by all stakeholders.

Example of leveraging a polarity with the Deputy CIO at the DOD:

When Dave Wennergren was the CIO for the Navy, he learned about Polarity Management® through Frew and Associates working with Barry Johnson. When he moved to the position of Deputy CIO for the DOD, he noticed a chronic tension everywhere he went as he was exploring information issues within the DOD. Some were strong advocates for Information Security. Others were strong advocates for Information Sharing.
See: Wennergren saw this tension as a polarity he could leverage rather than a problem he needed to solve. The polarity is Information Sharing and Information Security.
Map: He invited Barry Frew and Barry Johnson to map this polarity with him and his executive team.
Tap: After completing the map, they created Action Steps and Early Warnings in order to be intentional about going after both upsides and minimizing both downsides. The office of the CIO of the DON also looked at the draft and enhanced the map, action steps, and early warnings.
Below is an example of their work: 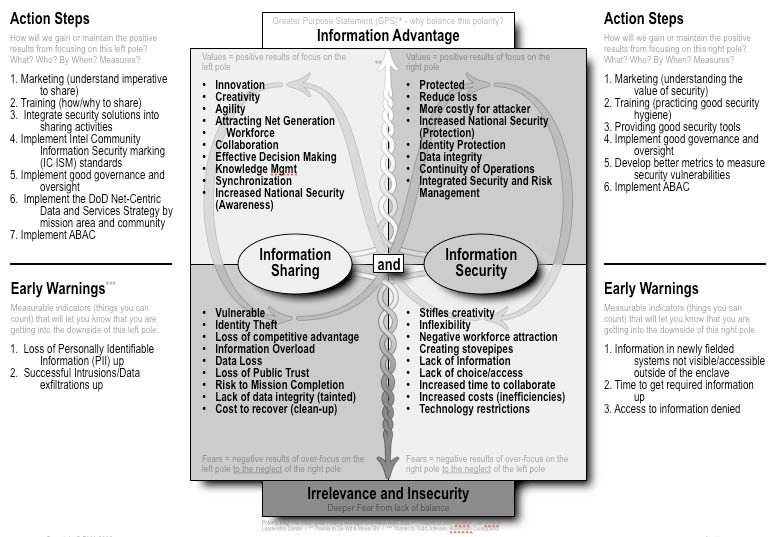 There are six polarities, the Real Time Strategic Change Principles that support system identity and improvement.  These principles have been tested and proven effective in field settings around the world.  Pay attention to them in systems work and your desired future is more attainable, faster and more sustainably.  Each is defined as a key polarity – a tension between two elements that need each other over time to ensure greater system health.
Making Reality A Key Driver
Know the inside of your system and also know the outside too. Put together what you learn and you’ll make informed decisions and take strategic actions.
Engaging and Including
Provide clear direction and invite participation. Lead in both ways and you’ll make smarter choices and create the commitment needed for useful continuity fast and lasting change.
Preferred Futuring
Combine the best of your past and present and compelling visions for your future. Build this picture and you’ll create your best future.
Creating Community
Ensure you focus on both the system as a whole achieving its full potential while at the same time finding ways for each part of the system and people in it to achieve their full potential.  Do this and people achieve peak performance by becoming part of something larger than themselves that they have created and believe in.
Thinking and Acting in Real Time
Be in your future and plan for it at the same time. Learn to do them equally well and your desired future will happen faster.
Building Understanding
Stand up for what you believe in and be curious about what others think.  Support both interests and you will continue to learn and develop – individually, in your teams and as an entire system.
We have repeatedly witnessed the magic of what happens when you bring disparate ideas, intentions and hopes together. People yearn to be heard. They want to be part of solutions to problems that affect them. Skilled design and facilitation make it possible to tap into this common human desire.  Shared trust between consultants, clients, and participants is the second ingredient that helps make this happen. It is through the ideals and values of Real Time Strategic Change that we continue to hold hope for the world and for our chances of having a positive impact on it.

Section by Kaliya Hamlin
Value Network Mapping and Polarity Mapping and Management are system level sense making and future insight.  These processes give vastly different stakeholder groups the opportunity to come to broad agreement, consensus if you will, about the nature and shape of the ecosystem. What organisms are in the ecosystem? How do they interact? What are the inherent tensions that need to be managed for the ecosystem to thrive?
They are complementary because early warning signs for the down side of polarities could be identified for particular roles in the ecosystem defined in the value network mapping process. action steps for particular roles could be anticipated and put into action when particular warning signs emerged in other roles.
Stakeholders with seemingly opposing points of view or with very different emphasis of what is important can see how their perspectives fits with others in a holistic way. They can also come a shared understanding of overall ecosystem health and work together to proactively maintain it. These maps should be updated regularly and remapped every 3 years.
Having shared maps of the roles and polarities will go a long way to having productive dialogue between all the ecosystem stakeholders.  The next section goes on to cover options for having effective systems level dialogue among self identified stake holders and perhaps most importantly regular people who are doing transactions in the ecosystem.
Value Network Maps and Polarity Maps are not the only to process tools that could be used to help bring shared language and understanding to the NSTIC stakeholder community.
This post is from pages 25-29 and 35 of Kaliya’s NSTIC Governance NOI Response – please see this page for the overview and links to the rest of the posts. Here is a link to the PDF.
This is the section before: The Trouble with Trust & the case for Accountability Networks
This is the section after: Value Network Mapping and Analysis