Introduction
All communities are not the same – they meet on different time cycles and are from different geographies.  This presentation articulates a simple four-quadrant model that explains the differences between communities in each quadrant, and articulates how to weave together online social spaces that arise from people meeting face to face in communities.  I will describe each quadrant and put forward some examples form my life, and then discuss how each of the quadrants relate to one another, what I think some missing pieces to enable this model.

Local Affinity
The first corner is Local Affinity. This is when people that live near each other meet on a frequent cyclical basis – weekly/monthly.  Examples would be a basketball team, knitting circle, service club, religious congregation, events linking professional interests Macintosh User Groups or social purpose like Eco-Tuesday.

These kinds of events happen on an ongoing basis. On this scale, with meetings happening regularly, several things would be good to have.
* it would be great to have each event have its own “home page” where documentation from the event was stored along with pictures taken and who was there.
* it would be handy to be able to do a search of people in that community based on who was at meetings I was at.
The focus of this kind of community site is on helping support the deepening of relationships, for members to support each other because they are both local and interested in the same “thing”.

In-my-life examples include
* The Breakfast Cabal (a community of technology-oriented folks in Berkeley) that meets one morning a week at a local deli. Its main and only way it is connected via a mailing list.
* The Fabulous Facilitators gathers one morning a month to talk about our practice as facilitators of group process.  We have a Topica list, and some of us started a group on Facebook but don’t use it.
* Planetwork Monthly Networking Forums between 2002-2005 had a broadcast mailing list and an early attempt at a social networking tool, Living Directory.
* My Episcopal church congregation has a physical directory with all the members of the church that is produced once a year.  There is a mailing list for the 20’s and 30’s group. There is no record of who was at church on which Sunday or participating in other church activities. There is on online space to share and connect to members.

Non-Local Affinity
The next corner is Non-Local Affinity this is for events and spaces where one escapes local geography to be with peers from all over who share interests. This “escape from geography” can happen at different scales
* local groups from throughout the bay area meet once a quarter for a pan-bay area meeting
* people from all over the country gather once a year at a conference on a topic they share in common like Open Source or Dialogue and Deliberation
* people from all over the world gather once ever 10 years to discuss population growth

These events are powerful because they build relationships rooted in common interest beyond the local.
They provide an opportunity to find people locally you didn’t know who share your interest and potentially to begin a local affinity group (or find one to join because previously you didn’t know it existed).
The level of connection one wants with these people depending on context. In technical communities the ongoing interaction amongst non-local affinity clusters is intense talking on IRC’s constantly.

One doesn’t necessarily want to be connected in the same way to these people non-local affinity people as you are to your local affinity. It is great to have a directory of who was there and what they are interested in.

In-my-life examples include:
* The National Coalition for Dialogue and Deliberation a conference that happens ever 2 years and brings together a diverse practitioners of various methodologies for different purposes from small group therapeutic work to public issue dialogues with 100,000’s of people.
* The Bioneers Conference that brings together people doing amazing work for the environment.
* The Internet Identity Workshop where people from all over the world for the past 4 years to work on developing the identity layer of the web.
* BlogHer brings together women bloggers around the country to connect.

The links between these two quadrants are important for deepening and enriching communities.

Non-Local to Local
When you escape your local geography because you are drawn to a particular conference because of an interest in a topic it is an opportunity to find other people who live near you who have done the same. My experience national conferences don’t create enough time/space opportunity to support people connecting to those who live near them at national events. Nor do they do this via e-mail or online spaces.

From my real life example at the National Coalition on Dialogue and Deliberation the local Bay Area based community of practice Fabulous Facilitators can connect to facilitators at the national conference who did not know about the local group and expand.
At an event like Open Source Convention is an opportunity for those interested in a particular language to find local user groups around different languages and platforms.

These two examples both happen today on an ad-hoc basis not in an organized fashion. A conception of non-local affinity online life linking to local affinity groups would be helpful in strengthening activity in both quadrants.

Local to Non-Local
It would be quite simply overwhelming to read a feed of all activity of all local groups around a particular affinity. What is of value is having the best of of highlights pushed up to get an overall sense of activity and highlight particularly interesting work.

A well known example where this happened was the Howard Dean Campaign where local sites for Deaniacs pushed up highlights to the state level site and then those state level sites pushed up content to a national level. What was even more interesting was the feedback loop – a feed from the national campaign was pulled back down to the state and local groups helping information flow.

Why does this matter
National scale organizations that have regional chapters should consider how to empower and link local communities and support their face to face connection in community better. Understanding this dynamic between affinity and the desire to connect locally can also support larger national coalitions around issue areas supporting “members” from a diversity of groups coming together locally.

Local Non-Affinity
The third quadrant is the Local Non-Affinity is where community activity across the diverse activities within a geographic region are aggregated and issues that affect the overall community. This is one of the most important quadrants that has been given little attention.

Many neighborhood associations have mailing lists and may have static sites but there are almost no systemic aggregation of events. Community newspapers and radio stations invite community groups to send in listings but this is all very analogue. Community sites with a diversity of local groups would aggregate information about the arts, cultural activities, opportunities for improving the community, service opportunities.

There are some attempts to aggregate information like this (my hope is that in the Social Web Foo Camp session we can cover what exists and what is missing)
* Outside.in brings together blogs in local places.
* Some local newspaper “platforms” that I have seen have some of this functionality.

A community of who’s who in the geography could be there and support community engagement – with information about what people would like their neighbors to know what things they have to lend or services they have to offer.
* Some local community currency sites do this.
* There is a site called Community Weaving that does some of this.

Weaving Local Affinity and and Local Non-Affinity Events/Communities Together

Non-Local, Non-Affinity
This corner is to be is what makes national governance really hard – lots of people who don’t live and don’t have much. It is what makes national governance hard. I think it is also one of the issues that make “mass” social networks feel overwhelming. This corner can is what can be perceived as “diverse” really it is best to be avoided and look for fostering diversity and inter connection between different non-local affinity groups and in linking local affinity groups together in the

Some coalitions around broad issues that affect diverse communities can have success in this space. An example would be Save the Internet coalition that included the NRA, Focus on the Family and MoveON.

Issues blocking migration to this model & steps to get there.
I hope to cover this at the Social Web Foo Camp session these are some initial thoughts.

This is the diagram that was drawn for the session. 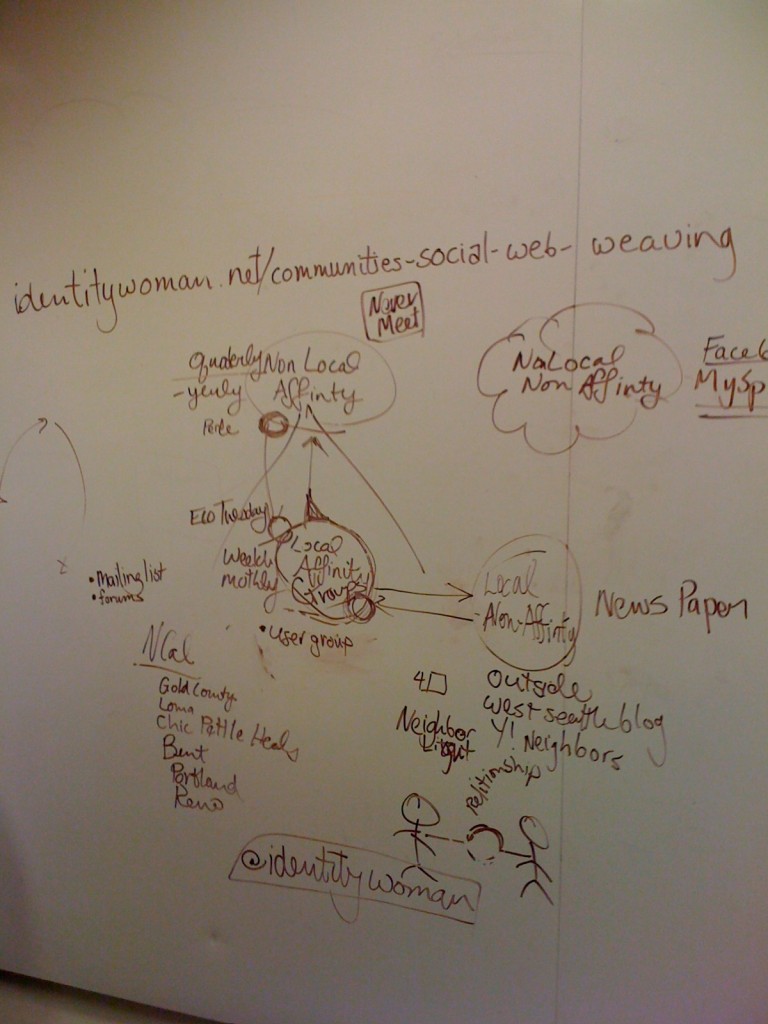 I will be working on integrating elements of this visual into the overall paper.

Background for this Page
I have been thinking about the relationship between online social spaces and face to face events since I went to a conference called Bioneers (www.bioneers.org) in the fall of 1999.  This amazing event has been happening now for over 20 years and brings together the “biological pioneers” those working on solutions for a sustainable planet every fall in Marin.  When I saw the program with the list of over 100 speakers with their biographies and at the back of their program was an amazing list of all these different groups working on different aspects of transforming our world to be more biological. I had been on the web for 3 years by that time and saw a glimpse that the sense-making and coordination could be really powerful if they were linked via the web.

The vision of how to link together face -to-face communities with online space that reflects them came into focus over years of participating in many conferences and finding community at the Planetwork conferences around 2004.  Between 2000 and 2003 I was participating in a lot of face-to-face events, and the only answer provided for how to connect afterwards was a Yahoo group.  This was not actually what people wanted, but there was not much else out there. There wasn’t something called a “social network” yet.  Planetwork is an organization that was founded to explore how the internet and information technology could be used to address the environmental crisis that we face on the planet. Through a series of community conversations the network came to an understanding about how persistent “user-centric” “digital identities” for people and how we should have profiles that we could bring help people between different autonomous online spaces for different groups with different focuses and if networked together work together (asn.planetwork.net). This would be cool, I thought, AND we need to have online tools for people orient in the context of communities and face-to-face events.  The model articulated here is something I have been thinking about since 2004, when I was articulating a design of a network of networks for engaged spiritual communities.